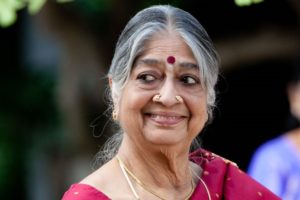 My Inspiration and first love 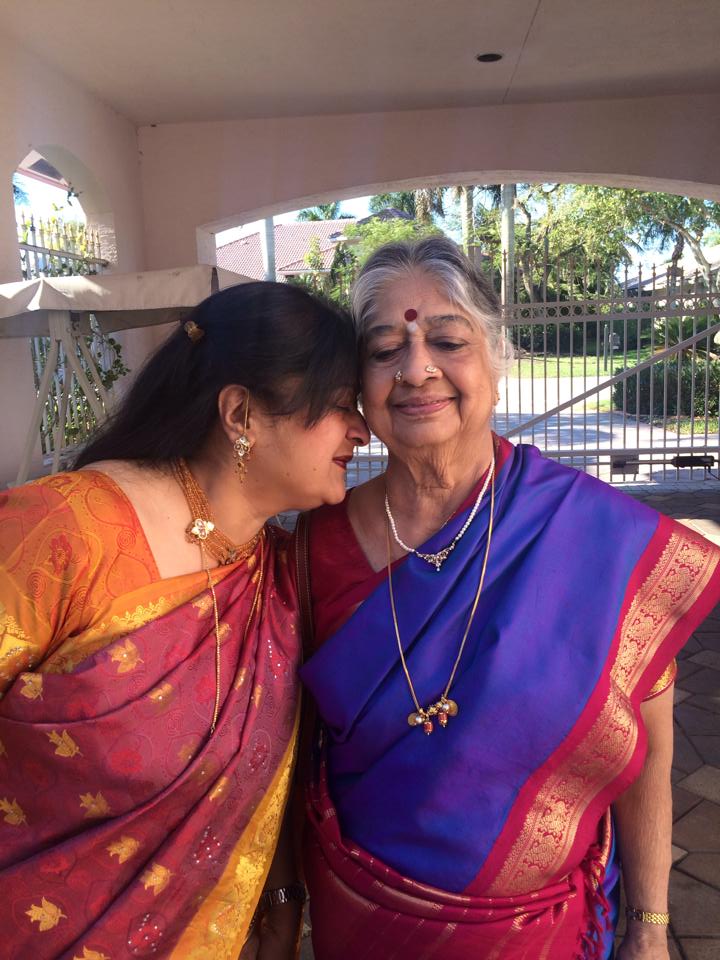 She has been my inspiration, my reason for writing. At times, I felt we were part of the same soul energy in two bodies. She was in my eyes the epitome of love, her love for me was not tied to any condition; it was selfless and didn’t waver no matter what I did or said. And I felt exactly the same way about her.

In 2008, I began writing When the Lotus Blooms to tell the world the story of her incredible birth, the outcome of a divine blessing from Parama Shankaracharya graced by magical Kamakshi Meru. During the writing process, I would have long conversations with her several times a day where she would bring to life the customs and traditions of the time, creating a beautiful painting in my head about all of my ancestors, some of whom I had never met. She was a natural storyteller and it is her stories that finally became the books I wrote in her honor.

In 2009, she fell ill. She was undiagnosed for several months and would call me unable to sleep or focus. I would sing to her, chant with her and guide her with meditation into slumber, night after night. There wasn’t a moment in the day when my thoughts were not filled with worries about her well being. It gave me physical pain to even think of her suffering and I focused all my energies willing her into better health. Then, in May of that year, I went to Bangalore determined to heal her with the power of my intention, the purity of my meditation and the universal force of my positive thoughts. For nine weeks I sat by her bedside editing my manuscript which I had then entitled Rajam. Having completed only half of it, there was a niggling fear within me that she may not live to read the completed book.

Then one night, nine Brahmakamalams bloomed in her garden and as I slipped out with a flashlight to witness its magical blooming, I knew in my heart that she would recover. And I had the title of my book; When the Lotus Blooms. I decided to create a myth about the blooming of this rare and beautiful flower and connect it to her birth. And thus was created the myth of the Brahmakamalam. So it was no surprise to me that she went out in a blaze of 11 Brahmakamalams blooming.

For the last four months she was battling renal failure brought on by her heart condition. For six weeks that I was with her this summer, I tried to motivate her to fight and get back to her earlier health again as I had done over a dozen times in the last decade. But this time I knew in my heart that she was not going to recover. I persuaded my sister to prepone her ticket and come to care for her which she did, and was able to help Mummy get a lot better, able to speak and walk. For a while, she seemed to be recovering but in the last few weeks prior to her passing she was losing the ability to move her legs. She told me that every night my father was sleeping next to her. I knew then that I had to stop praying for her to live, but instead plead with the Universe to end her earthly suffering. She had lost the will to fight. 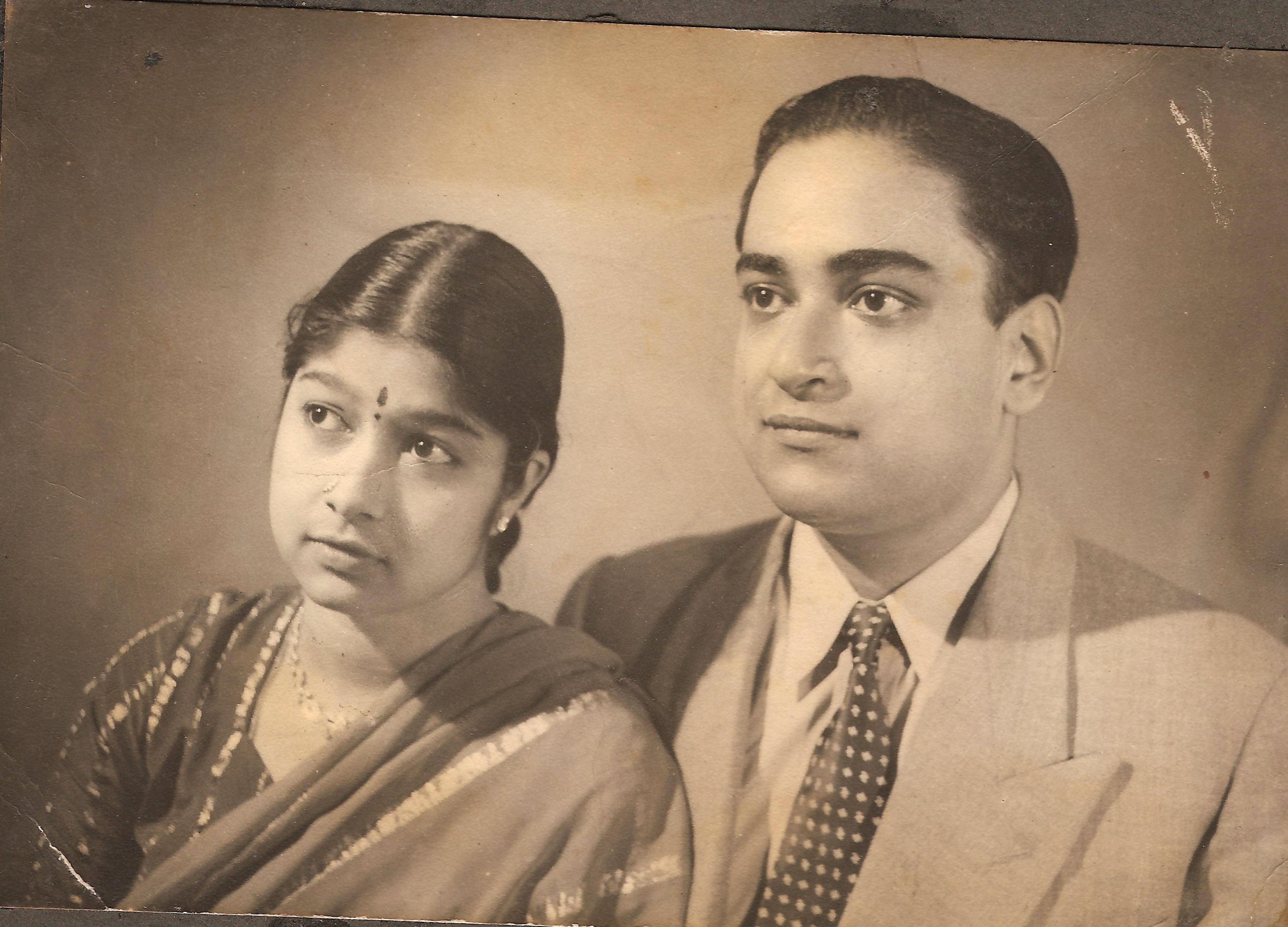 The Monday before she went, she told me she was tired of battling her illness and wanted to go. Lack of sleep, inability to eat and digest her food, open wounds in her leg and crippling body pain  combined with the strain of dialysis had depleted her strength. I listened to her and realized that we were all being selfish attempting to prolong her life when she was in so much discomfort. I then told her to give herself permission to die and ask Appa (my father) to help her release herself from earthly bondage. And she said “Kanchi can you teach me how to do that?” Unfortunately I had no clue.

That night, the first batch of flowers bloomed in my patio and I knew that she was going to pass on 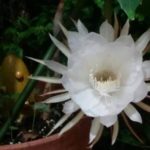 very soon. That afternoon in a dream, I saw my father taking her away. His face was blazing with tejas, beaming in joy. After several years he had appeared in a dream and I was at peace knowing she was finally going to be reunited with him. When she passed that Friday, August 24th on Varalakshmi Nombu, I knew that all her Devi Puja, the hundreds of songs she had written dedicated to Devi had finally borne fruit, and she had merged with the Divine.

I felt a wave of relief. She had passed, and her suffering was finally over. 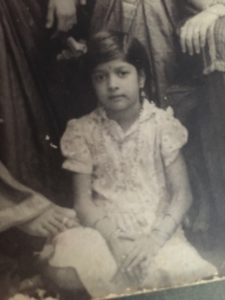 Kamu, daughter of Parthasarathy and Rajam, was born on October 11, 1935 in Chidambaram. As I have described in my book she was a vivacious person and touched the hearts of anyone she came across. When she met Kandu at the age of 16, they fell deeply in love and remained that way for the next 44 years until his untimely death one Diwali night when he was hit on the forehead by a firecracker. I never thought she would survive his death, so deeply committed were they to one another, but her resilience astonished me. She learned to meditate and slowly started living once again. She had for twenty years run a 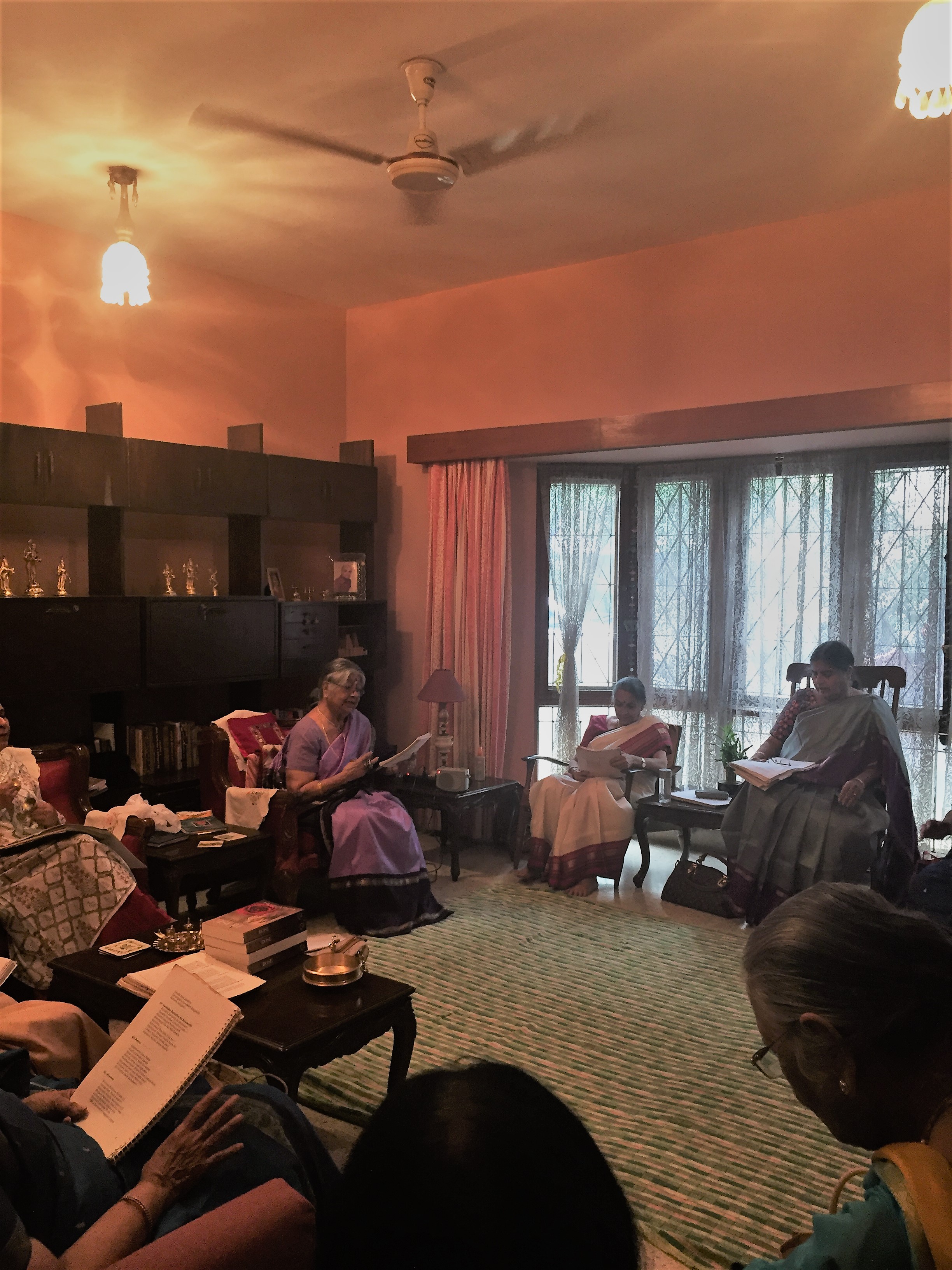 bhajan group called Shaankari, and the ladies came faithfully each week venerating her as their spiritual guru. Her love for music and her “Devi Kataaksham” (her aura as the divine mother) was perceivable, and resulted in 400 wonderful keertanamas and bhajans, compositions which will remain as her legacy. Karunai Pozhiyum Kanngal was written about Shankaracharya who had blessed her mother with Kamakshi Meru resulting in her miraculous birth. It has been popularized by the late Maharajapuram Santhanam, who was a family friend.

But it was the Internet that completely transformed her life. 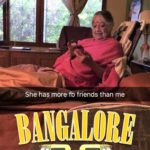 One day, she called the Help Line which is a directory inquiry, and told them she was 75 year old lady who wanted to learn to use the computer and could they help her. Young Syed came to the house twice a week and taught her to use Facebook and Gmail. She learned to upload pictures and for the longest time typed Like for every picture she liked on FB!! LOL. But her favorite was Whatsapp.  Every morning she sent a video or Vedio as she called it, and I really miss waking up to her messages.

In spite of not having a formal education she was a social butterfly, as much at ease throwing a formal dinner for the Chairman of Rolls Royce and shaking Prince Charles’ hand as she was conversing with her relatives in Mylapore. She had the uncanny knack of being able to discuss a wide variety of subjects (from her tamil Magazines) to people of all ages, talking to them at their level with what interested them. Her zest for life was apparent in her appearance. She took pride in dressing up and bought saris for each season. Malmals one year, kalamkari printed silks the next and when she walked into a room in a whiff of perfume, y 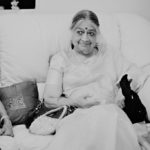 ou had to stop and look at her. No one could ever ignore her. Her double Mookuthi, the silver keychain at her waist, her sari draped impeccably with matching necklaces and adornments. In her later years when she switched to colorful kaftans, she wore matching beads and plastic bangles and just last year forced my sister to buy colorful watchstraps to match.

And she took pride in her home. Everything was impeccably arranged. Each week she would bring out her collections. Bells from around the world one week, brass lamps the next, dolls from every country, quartz grapes and eggs from Mexico. She never lost her enthusiasm till the end.

Her devotion to God was admirable. She celebrated every festival  making Subbu the cook, make the necessary food items that were customarily prepared. Navarathri in our home was always spectacular with one room cordoned off for the Golu doll display. She initiated me into performing Varalakshmi Nombu and in our last conversation I told her about all of my preparations for the pooja including Maavu Kolam which I normally would skip. She had even given me the menu a few days before and even though she had passed, I still prepared each item in her honor. Instead of placing the Amman in the altar I had the misfortune of placing a photograph of Amma and worshipping her, for she was  daivam(God) for me. Always has been, always will be. 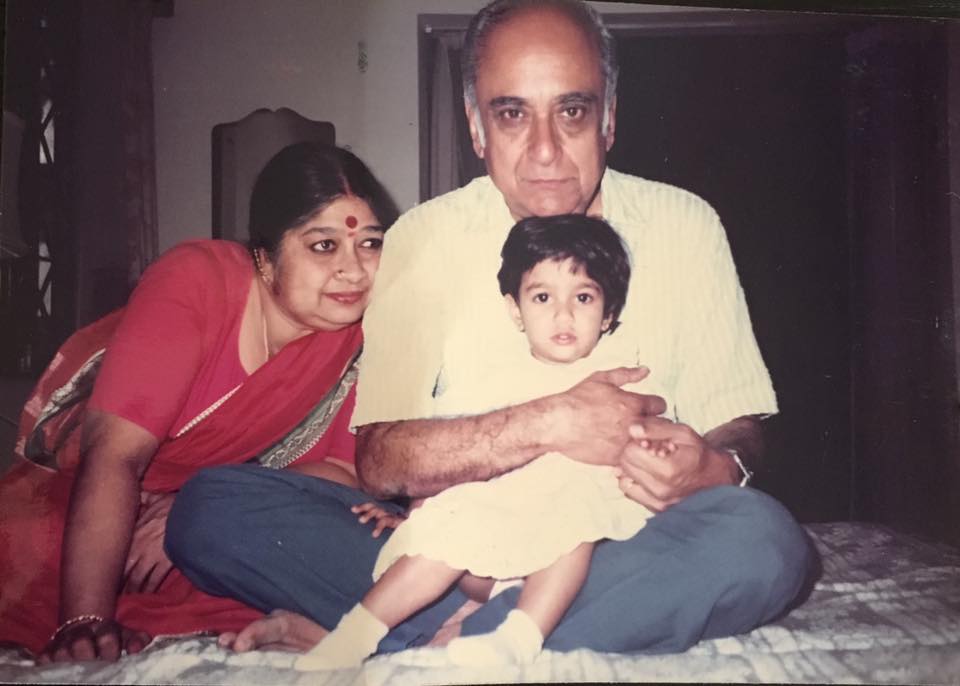 She lived a full life and enjoyed her six grandchildren and even saw great-grandchildren. She had a special relationship with each grandchild and many of her traits live on through them. She was the matriarch, the role model for all of us and we all miss her vibrant personality. All three daughters loved and cared for her in their own special way. My husband was the son she never had and he made sure that she never lacked anything. No expense was spared when it came to her comfort from getting her business class air tickets to the US to attend her grandchildren’s wedding, to buying her a bed, a TV and a computer and so much more. She only had to mention it and he would ask me to buy it.

When she lived I had the rare privilege of taking care of her completely and now I leave her in the loving care of my father, her one true love.

Her life has been immortalized in my two books, When the Lotus Blooms and A Rose from a Dream. If you haven’t already, please do buy a copy in her memory.

When the Lotus Blooms:

A Rose from a Dream 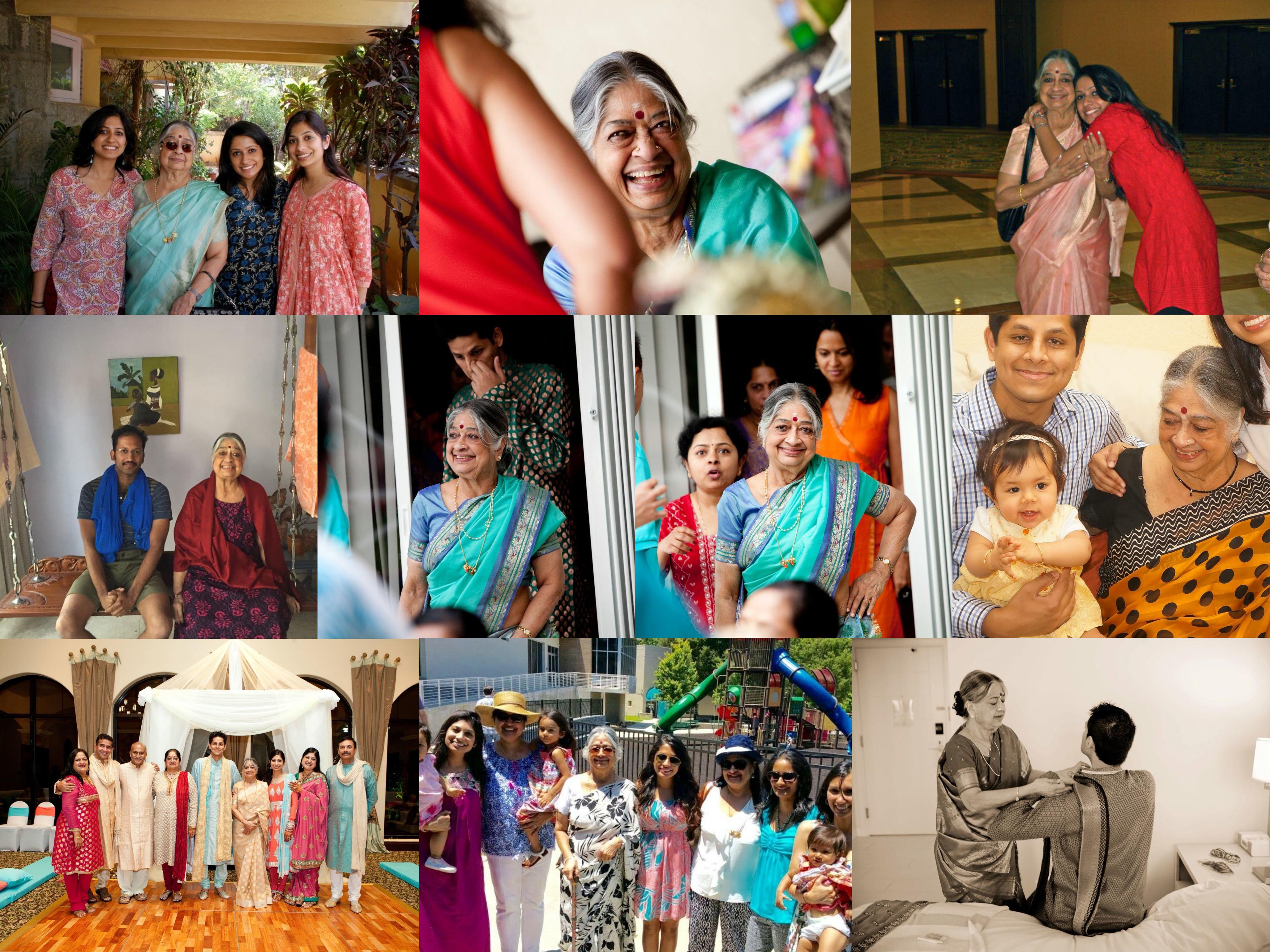