A Rose from a dream spans the decade 1942-52, a very special time in India, pre and post independence. I wrote about this particular era because for the present generation growing up in India and the US, freedom is sometimes taken for granted . They cannot even begin to understand the mindset of those who struggled and died so we could be free.

The book gives you a perspective from many angles:

Famous revolutionaries like Vanchinathan and Bharathiyar whose stories are legendary, known and recognized for their patriotic fervor  and the lesser known Swaminathan and Salih, ordinary folk who worked under the British yet longed for freedom.

The freedom movement was quite different in Bengal as compared to the south. In fact, young Kamu had no idea what was happening or that she was privy to a very special moment in time.  What  is refreshing is that for the first time you read about Indian History  from the perspective of the women of that time.

A Rose from a dream carries a piece of my heart: my love of country. Buy the book and walk through history. 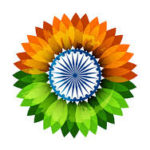 Here is a small excerpt

The atmosphere in the city was particularly festive. Thousands of people were in the streets, already holding paper tricolor flags and wishing one another Happy Independence Day, although that momentous event wouldn’t take place until midnight. Every government building in the city was lit up, the illumination particularly impressive against the darkening skies. There was a prediction of thundershowers and a collective hope that this wouldn’t dampen the festivity. In preparation for the grand moment, the entire street had been covered in a shamiana decorated with festoons of orange white and green. Tonight no one would sleep. It would be a night of celebration.

Rajam and Kunju had tears in their eyes as they watched the friends greet each other. They knew this day meant something really special to these folk. This was a group of people who had  fought for the freedom of the land with a passion. Perhaps never again would this spirit of patriotism rise in the nation against one common enemy. No one could ever understand the depth of feeling and the deep love for the land shared by this band of revolutionaries. Never again in their lifetimes would the longing for Swaraj (self-rule) inspire poetry that tugged at one’s heart strings making tears stream down one’s cheeks. These were very special people, this a very special time, and they were indeed privileged to live through it.

Cries of Jai Hind and Vande Mataram rang all around them, and then they stood, one nation, one voice. For the first time as free Bharat, they heard and sang Janaganamana, the melodic and evocative song written by Rabindranath Tagore, and adopted as the nation’s National Anthem. It was indeed a very special day, one of hope and of dreams as they stood together singing the national anthem. Every citizen, rich or poor, would have tears in their eyes, a combination of painful remembrance and visionary imaginings.

They were all in the streets greeting each other, laughing and cheering. The temple doors were open and people were pouring in to give thanks to the gracious God that had granted them the honor of this momentous day. Sweets were distributed and firecrackers lit the sky. The family was going to see the city lights, but for others, fatigue crept in and slowly the streets emptied and everyone found their way indoors, exhilarated yet exhausted from the emotional festivity.

As Swami lay down he couldn’t sleep for a long time. He led a sedentary life, and this was too much excitement for him. He thought about all the great martyrs who had died for this cause from Bhagat Singh in the north to Vanchinathan in the south, and he reminisced about his attempt to aid the struggle despite wearing a British uniform. For many, their minds had been kidnapped and brainwashed, leaving them with diminished self-esteem and questionable loyalty. Added to that was so much pain. The searing pain of communal riots and hatred, the partition of the land and the creation of Pakistan.. The nation had suffered, and it would take tremendous effort to begin the healing process. The scars of colonial slavery would take a long time to mend. But people had faith that the leaders were good and were ready to follow the guidance of stalwarts and erudite intellectuals like Nehru, Gandhi and Patel who would lead them from darkness to light. India would awaken to freedom and enterprise, to belief and tolerance, to hope and dignity.